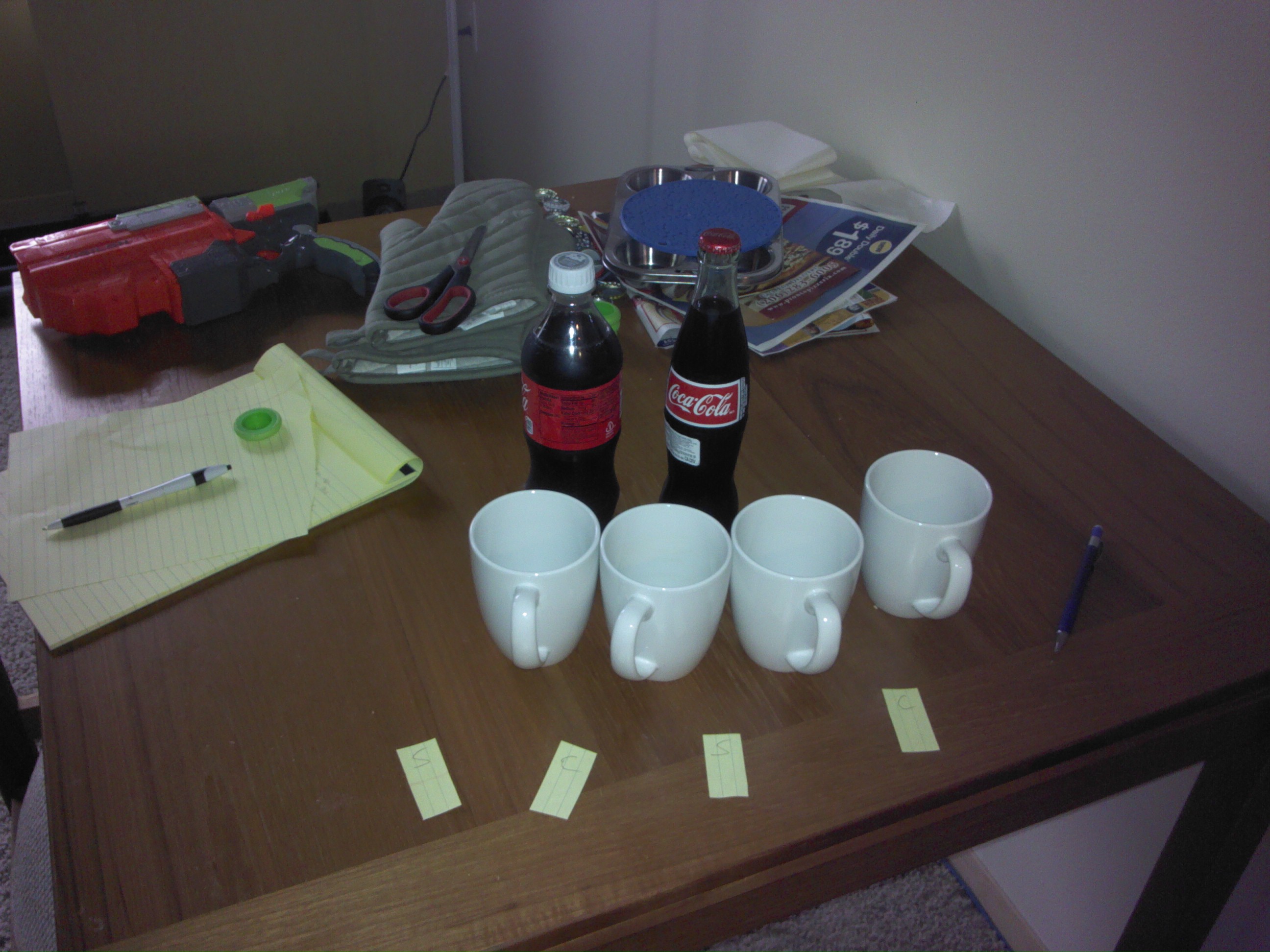 The items used in the experiment are High Fructose Coca-Cola, Cane Sugar Mexican Coca-Cola, and tiny slips of paper to put under the cups to secretly indicate what the cup contained. Person A would fill two cups for each type of cola and mark a piece of paper to indicate what was the contents of the cup and hide it underneath the cup. After finishing person A would leave the room and person B would enter the room. Person B would then shuffle the cups without looking at the pieces of paper and call in person A when he finished. Finally, person A had to drinking each cup and write down what was inside each. After writing down all the guesses we compared the guesses to the actual contents. Before repeating the experiment we washed out all cups with water.

First two sets of trials, both my roommate and I were guessing at about chance. However, on the third trial I noticed that one cola was more bubbly than the other. After identifying that it was the high fructose one, I was able to get the answer 100% of the time. My roommate, also following the observation was able to identify the contents 100% of the time. As a result, we called off the experiment because we were able to identify the cola without attributing it to the presence of high fructose corn syrup. We saved the remaining precious cola for consumption during dinner.

Next experiment we will try to use just pure high fructose water and cane sugar water so that we can control the level of bubbliness. Secondly, we need to cover the cups, or have person A and B blind folded, as it might be possible to identify the contents based on the colour of the liquid. Third, instead of doing the two cups for each type, to make the experiment simpler and more rigorous, we should just fill two cups with three cases: high fructose - high fructose, cane sugar - cane sugar, and high fructose - cane sugar. With the two cups for each type, by guessing the first three cups you knew what the last cup was rendering the last guess giving us no additional information.

The consumerist has an article by Chris Morran about the difference in taste Coca Cola: We Don’t Need To Make A Cane Sugar Version Because You Already Have Mexican Coke. They interviewed Greg Galvez, vice president and general manager of Importation and Commercialization, Coca-Cola North America. He says, “our research shows that there is no perceptible taste difference between the products. Whether sweetened with high fructose corn syrup or sugar, a Coke is a Coke and both are ‘the real thing.” His wording is slightly ambiguous. Is he implying that people cannot taste the difference between the Mexican Coca-cola and the regular Coca-cola or is he saying that if we control all other ingredients then we cannot taste the difference between HFCS and cane sugar?

The Huffington Post has already performed this experiment documented in the article Coca-Cola Taste Test: High Fructose Corn Syrup vs. Sugar. They concluded that 85% of participants could tell the difference and that 80% preferred the taste of the Mexican Cola. None of the articles I found tried to control for the differences in the non sugar ingredients.

Is Mexican Coke the real thing? By Louise Chu

Mexican Coke a hit in U.S. By Kevin Pang